I have to apologize for the delay. I was in shock.  My voice or the voice I borrow to whisper is no longer available for earth plane communications. So you will forgive me if this blog is not entirely devoted to Being Here Now, although my advice to live in this

moment could never be more poignant or important than right now.  It is in the realization of loss that one feels the bitter sting of life’s fragility… its brevity. “Oh, had we only known …” when a loved one,  a family member, a pet or beloved public figure passes.  Had we only known in advance that this person would be GONE.

This is the sad truth about James Gandolfini, the brilliant actor sometimes better known as the sensitive, complex New Jersey mafia boss in the HBO series The Sopranos.  Who would have thought that Tony Soprano would be so quickly swooshed away… vanished and suddenly unavailable for us to admire or speculate impatiently about what J.G’s next big role might be?

His was the voice I used (and still intend to use …) to whisper instructions, to cajole, intimidate and in the worst of cases, to command.   It is the voice E. heard when I ordered her into the Manhattan pet shop where I was waiting for my hysterical student to appear. His was the voice of the “angel” who saved Ms. Em (and me!) after her disastrous accident on the German Autobahn #3 near Aschaffenburg in April of 1993.

James Gandolfini’s throaty baritone, with his New Jersey accent was the ideal voice-choice for my purposes of other-worldly persuasion.   His voice: Authoritative but still sensitive, respectful but with a slight threat… ideal.  I could say that I am “deeply saddened” but this is what a presidential candidate might say about this incalculable loss to the art of acting.  I can only express the VOID that E. is (along with his acting colleagues, directors, producers, friends, family and the millions of Soprano fans) feeling in the wake of this brilliant actor’s early departure. Granted, he is flying now, as free as I am. Jimmy (his friends called him) has his own cloud to be sure… but the feeling of loss for earthlings is colossal and real.

James Gandolfini’s funeral was held at the Cathedral Church of Saint John the Divine. I was happy about the choice of location because the huge edifice could accommodate the crowds of people needing to BE THERE NOW, to participate in and the honor the memory of that vulnerable stranger who through his immense talent was not a stranger at all.  What made me dance was the animal-friendliness this Cathedral Church has proudly displayed since the tradition of blessing all animals began.  Here are some links to the World Animal Day 2012. 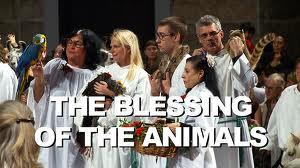 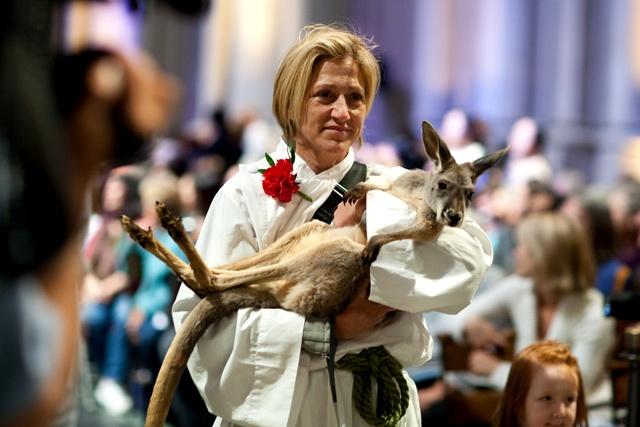 Above a photo of Edie Falco (Carmela, Tony’s wife in The Sopranos series) holding a baby kangaroo for blessing at the Church Cathedral’s World Animal Day a few years ago.  I am sure Edie could never have imagined the heartbreaking event that would bring her back to this location.  Life can sometimes be strange indeed.  I needn’t repeat myself but I will … Carpe diem.

Broadway theaters simultaneously dimmed their marquees at 8 p.m. on Wednesday in honor of this great artist. Thursday of last week was James Gandolfini’s funeral.  On Youtube I recommend this video to get the feeling of BEING THERE at the Cathedral Church of St. John the Divine. This is a beautiful tribute featuring fans who traveled long distances to be with other Tony Soprano fans. They simply could not stay away.

Finally, here is quotation that I chanced upon. (Ha-ha!  Remember there are no coincidences.) I was looking over E.’s shoulder at the exact moment that her radio blared out the bad news from Rome. This was the sentence she was reading from Richard Ford’s Lay of the Land:

I mean, isn’t that the most cherished pre-post humus dream of all? The news of our premature demise catching everyone so unprepared that beautiful women have to leave fancy dinner parties to be alone for a while, their poor husbands looking around confused; grown men find they can’t finish their after-lunch remarks at the Founders Club because they’re so moved. Children wake up sobbing. Dogs howl, hounds begin to bark. All because something ineffable has been erased, and the world knows it and cannot be consoled.

I liked the part about the dogs howling and the hounds barking… but seriously… this quotation is possibly more appropriate for the death of giants like JFK or the eventual, but looming, demise of Nelson Mandela, however, it is also in some wondrous way fitting for our beloved James Gandolfini.

Upon hearing this announcement E. put her book down, took off her reading glasses,and wept.